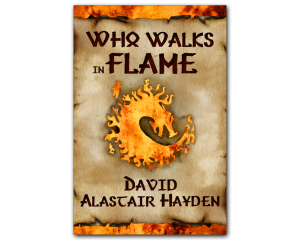 As an avid reader, I tend to keep to certain types of books–and, honestly, certain authors. Reading Indie Fiction is changing that;there’s so much wonderful work out there that it would be almost irresponsible not to test new waters. And my favourite part about reading Indie work is finding that occasional diamond in the rough, an example of writing that’s so good you wonder why you didn’t find it sooner. Who Walks in Flame by David Alastair Hayden is such a book.

It’s a short story set in Hayden’s lush fantasy world of Pawan Kor. Bregissa the Skald is charged with leading an army to victory against an ancient nemesis–if she can hold her allies together long enough. There’s a Witch King, a host of reptilian infantry, and an enormous flame breathing dragon. What’s not to love?

When I read the blurb for this book, I knew it was right up my alley; I’ve had a couple of Hayden’s books on my reading list, unopened, for quite a while now, and Who Walks in Flame was a great excuse to finally get going. I approached this book eagerly, and wasn’t disappointed. It perfectly sets up his writing style and the feel of Pawan Kor–though I’ve found his newest novel, Chains of a Dark Goddess, to have a unique flair that keeps this world fresh.

The opening words of a book are crucially important; they not only set the tone of the book, they act as a litmus test for the reader. If you can’t grab their attention in the first pages, you’ll fight for their attention throughout. But it’s a special kind of writer who can do it in the first sentence. This book had me from the beginning, and never let go.
And this is what I loved about the story as a whole. Hayden does a tremendous job of creating a compelling story. The bones of the plot are pretty straight forward–Bregissa leads her army against the witch king Khuar-na and his Scorch Walker, accompanied by a faithful companion who has more to lose than he’s letting on–but Hayden is able to weave it into something that seems almost mythic. Better yet, as fantastical as some of the events and characters are, they’re completely believable and I never found myself having to suspend my disbelief. This is good fantasy.

Bregissa is at the heart of this story, taking even second place to her conflict with Khuar-na. Don’t get me wrong; the urgency of this conflict is well described and will obviously have repercussions for the world. For the people of Pawan Kor, it’s do or die. But Bregissa’s story is much deeper.
On the surface, we have a woman who’s not only willing, but more than capable of leading an army–yet has to earn the respect of the kings she’s gathered together before she can accomplish anything. There’s also the relationship with her lover Kerenthos, who would do anything for her, even at the risk of his own destiny. But the real story here is that Bregissa is a remarkably powerful person, more so than the others in her life know–and this power has come at a grave cost. I don’t want to spoil it, but let’s say it involves a betrayal and an evil act that is (perhaps) justifiable. This act gives her character a satisfying depth, and she ceases to be the resolute and unfailing hero she”s presented as in the opening pages. She’s not an anti-hero–I found myself sympathizing with her easily–but neither is she  a spotless soul.
If there’s one thing I didn’t like about this story, it’s that Bregissa isn’t explored enough. I got invested in this character more than the others, and that makes me want to know more–but the story is under 50 pages, and we only get hints of her origins, potential, and the arc in between (save for what happens in the plot, of course). I thought that this story served as a backstory for some of Hayden’s other books in the Tales of Pawan Kor series, but none of the plots of those books seem to reference the events in this one. Of course, I haven’t read them yet, so I may be presently surprised; still, I was disappointed to not get to know Bregissa more in this story.

There’s more to tell of Khur-na and his giant dragon as well, and I hope that Hayden revisits this character. There are hints of a great empire in which he enslaved much of the world, and tremendous rebellion in which he was overthrown and imprisoned. I’d be interested to see a sort of prequel for this book that explores what’s sure to be an epic tale. But, unlike Bregissa’s story, hints and teases are enough for Khuar-na. The mystery adds some depth to his character that wouldn’t be diminished if left as is. Although he’s such a great villain that I wouldn’t hesitate to read more about him.

One more thing to note about this story is Khuar-na’s dragon, the Scorch Walker. This beast is massive, and nigh undefeatable. Talk about raising stakes–when Khuar-na rides the Scorch Walker into battle, they reach the stratosphere. The climactic battle with Bregissa and her army is just plain awesome–this is the reason I read this kind of book in the first place.

As I’ve gotten more involved in the Indie Community–and make no mistake, I’ve still just scratched the surface–I’ve definitely found a cadre of authors I’ve dedicated myself to following. Ryan Casey, J. M. Ney-Grimm and Lindsay Buroker were at the top of the list–but now David Alastair Hayden joins their ranks. Who Walks in Flame is a terrific quick read–and it’s free. If you haven’t read this gem yet, do yourself a favour and check it out.

David Alastair Hayden’s Who Walks in Flame is available for free at Kobo, Amazon and Smashwords. He keeps a nice looking blog, and you can also find him on Twitter.

One comment on “Indie Review: Who Walks in Flame”