I didn’t intend to do a post today, but got an exciting announcement via Twitter this week–Scapple for Windows is in a free open beta!

Those of you who’ve followed this blog know I’m a fan of Literature and Latte’s word processing program Scrivener–most Indie writers use it, or have at least tried it. But, it’s a MAC OS program, and took a while to come to Windows. The ‘port is extremely useful, though it lacks a few of the features of the MAC version. If you haven’t already, you can check it out here.

Scapple is the much-touted companion program to Scrivener. It’s mind-mapping software–you can jot your ideas down on the virtual page, connect them, move them around, and generally brainstorm to your heart’s content. I’ve been using Microsoft OneNote for this, and it works fine…but it’s lacking. It doesn’t integrate with Scrivener, I’ve had issues synchronizing files across computers, and using it alongside Scrivener is counter-intuitive.
Scapple does integrate with Scrivener (well, sort of…keep reading), and being made by the same company, the two programs are designed to work in concert. But Windows users have had to wait patiently while MAC users reap the benefits of this robust program.

Until now. If you’re a Windows user, you can go here to download the open beta, and try it for yourself.

My first impression of this product is that it’s…impressive. There’s a unique simplicity to it–there’s zero pretense. It’s brainstorming software, and doesn’t pretend to be anything else. Some people may not like that it doesn’t have a billion features, but I rather prefer it–it’s like an extension of Scrivener, and that’s all it needs to be.

Here’s what you do: double click anywhere in the program window, type your note. Double click elsewhere to type another note–then drag that to the first one to create a connection. (Press the Alt key as you do this to create an arrow). Do it again to remove the connection.

And apart from a few tricks, that’s it. But really, it’s all that’s needed. Very nice. Here’s a screenshot after I fiddled with it for a few minutes: 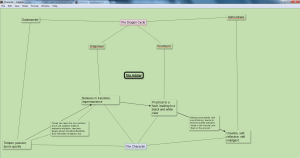 Now, keep in mind that this is a beta. I noticed that the spellcheck doesn’t work correctly (it would insert the correct spelling into the middle of a word, creating an extra-wrong spelling). More importantly, the Scrivener integration doesn’t seem to have been added yet.* You can export your Scapple file and insert it into Scrivener, but the Drag and Drop feature doesn’t work–probably because it requires you to use Scrivener’s “Free Form Corkboard” feature, which isn’t available in Windows.

*Marta posted a workaround in the comments below. Simply create a Scapple file then add it as a Project Reference in Scrivener. Whenever you open Scrivener, you cal right click on the project reference and open in the default editor–bingo! It’s not exactly imported into Scrivener, but it’s as good as. I’ve tried it and it works like a charm. Thanks for the tip, Marta!

Still, it’s an excellent tool to complement an already excellent tool. Definitely recommended! I’m going to continue playing with it, and will probably post about it again soon–in the meantime, try it for yourself, and tell me what you think!

Scapple is available in open beta until September 15 2013. Once version 1.0 is ready, it will go on sale, probably for the same price as the MAC version at $14.99. Here’s a features page–but keep in mind it’s for the MAC version.